The New York Rangers are a professional ice hockey team based in New York City. They are members of the Metropolitan Division of the Eastern Conference of the National Hockey League.

Madison Square Garden, often called "MSG" or simply "The Garden", is a multi-purpose indoor arena in the New York City borough of Manhattan. 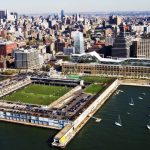