The Daytona 500 is a 500-mile-long (805 km) Monster Energy NASCAR Cup Series motor race held annually at Daytona International Speedway in Daytona Beach, Florida. It is the first of two Cup races held every year at Daytona, the second being the Coke Zero 400. It is one of the four restrictor plate races on the Cup Schedule.

ABOUT THE DAYTONA INTERNATIONAL SPEEDWAY

Daytona International Speedway is a race track in Daytona Beach, Florida, United States. Since opening in 1959, it has been the home of the Daytona 500, the most prestigious race in NASCAR. In addition to NASCAR, the track also hosts races of ARCA, AMA Superbike, USCC, SCCA, and Motorcross. 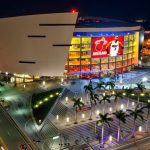