Closely associated with Dada and Surrealism, Max Ernst made paintings, sculptures, and prints depicting fantastic, nightmarish images that often made reference to anxieties originating in childhood. Ernst demonstrated a profound interest in Freudian psychoanalysis, which is apparent in his exploration of Automatism and his invention of the Frottage technique.

Max Ernst’s Clouds, Sun and Sea is a captivating and fiery dream-like landscape painted in 1952 while the artist was living in Sedona, Arizona. Following the dissolution of his third marriage to collector and gallerist Peggy Guggenheim and his move to New York in 1941, Ernst married fellow artist Dorothea Tanning in 1946, moving out west that same year, where the duo would be based until 1953. 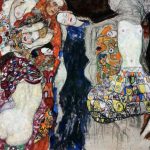