Thousands of demonstrators called ‘yellow jackets’, aptly nicknamed for their fluorescent garb, have convened in the streets of France in protest of President Marcon’s recent gasoline tax. Marcon attributes the legislation as a step toward combatting climate change in the wake of an increasingly presumptuous lack of global action.

Antagonists lambast the decision, inciting that ‘ecology is only an alibi’ and his incapacity to tax the gas guzzling airliners spewing tons of CO2 insinuates the tax is just a front to conceal a clandestine personal agenda: covering a European union debt and cutting taxes for the rich.

Public transportation has since decayed into a less efficient system, failing to provide the basic needs of mobile transport for citizens.

The controversy extends beyond the immediate implications of a small increase of gas per liter at the pump, the affected majority are primarily white workers and middle-class Frenchmen, the links of a broader French society. The uprising is essentially about mobility and the larger trends plaguing France; the evolution of cities, transitioning mobile standards and a changing social demographic. France’s regional governments are twisted in a tight predicament;

Modern and decentralized France in postwar years promised prosperity and mobility. (Times) The regional runways operated by the SNCF, France's national state-owned railway company, was overinvesting in high-speed trains which catered more to the larger and prospering cities. (Times) Public transportation has since decayed into a less efficient system, failing to provide the basic needs of mobile transport for citizens. Small businesses are dying in smaller cities and forcing citizens to seek jobs elsewhere,

leaving some to purchase basic goods in shopping malls. Even without factoring in the gas tax, small regional roads are heavily tolled after the French government ceded authority of the roads to a private company. (Times) On several occasions, Yellow Vest protestors stormed toll booths and allowed oncoming traffic to proceed without pay.

One member expressed his discontent, having ‘paid for the construction of the roads through taxes, and now having to pay a private company a fee’. (Times) Marcon has backtracked on some tax increases and offered incentives for the poorest workers, but they fervently refuse to be appeased by his ‘petty political patronage’. (Times) 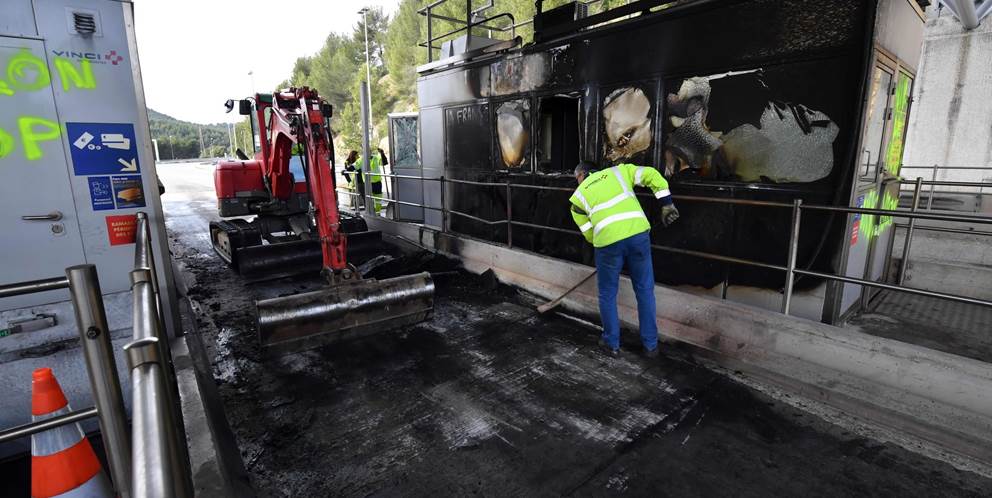 The relative decay in the transportation sector has taken drastic tolls on productivity. France perhaps outpaced itself in its early development of an efficient transportation system, thus provoking a rash response by a middle class that was ironically under a more robust transportation system than its neighboring eurozone members. Marcon ignited a residual sediment that spread rampantly throughout France’s middle class. However, the Yellow Vest movement has no substantial leadership, nor does it possess any remote leverage

over France’s administration. These recent protests have come from a narrow stratification of social class, those of White working men; it doesn’t cross enough class or social coalitions to garner the proper support it needs for substantial progress. Though inherently redundant, an improvement in the ailing public transportation service would alleviate a multitude of France’s wider systemic issues. History often paints a vivid picture, but that’s not to say that the events are unfurling onto a larger frame. 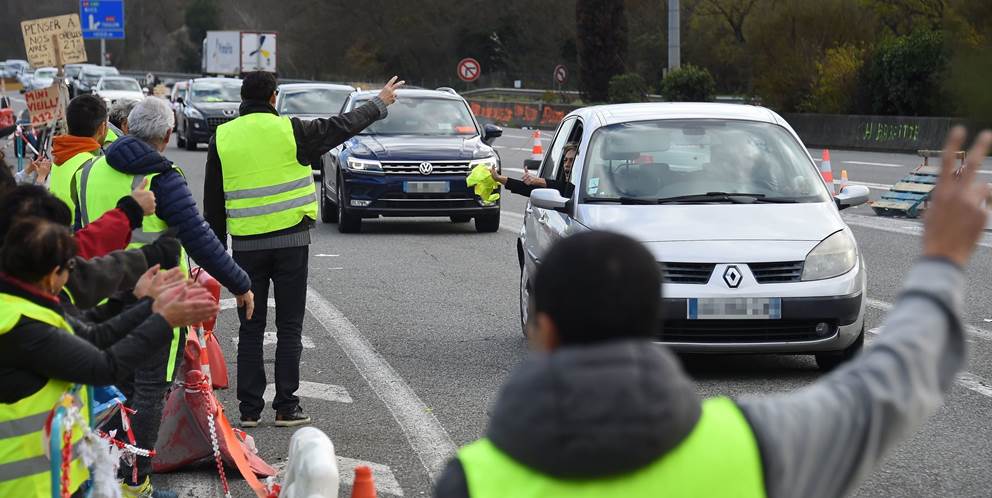 By MICHAEL KIMMELMAN for NY TIMES

After more than a month of furious, antigovernment demonstrations across France, it is easy to forget that a gasoline tax set all this off. A few cents per liter at the pump. A pebble in the sea of the French economy. A step to address climate change, according to President Emmanuel Macron. Of course, that’s not how millions of workers who depend on their cars saw it. Mobility is the story of globalization and its inequities. Mobility means more than trains, planes and automobiles, after all. It also includes social and economic mobility — being too poor to afford a car, being rich enough to transfer money out of the country. These are all inextricably linked. Weeks of protests by the Yellow Vests have made that clear.

Many of these protesters, predominantly white working poor and middle-class people who scrape by on their paychecks and pensions, live in what the author Christophe Guilluy has called “peripheral France.” The term is meant to imply both a state of being and the thousands of small, struggling cities, towns and rural districts beyond the inner-ring suburbs of places like Paris, Bordeaux, Lyon or Lille. “As small businesses have been dying in these smaller cities and towns, people find themselves forced to seek jobs elsewhere and to shop even for basic goods in malls,” said Alexis Spire, a French sociologist. “They need cars to survive, because regional trains and buses have declined or no longer serve them. Once you begin to unpack the Yellow Vest phenomenon, the uprising is a lot about mobility.” READ MORE >>

Experts have been drawing parallels between the Yellow Vests and the social rifts exposed by Donald J. Trump’s election in the United States and Britain’s plan to leave the European Union. But there are also larger trends at work in France, involving the evolution of cities, the impact of cars, and the geography of race and class — trends rooted in the postwar years. In 1947, the book “Paris and the French Desert,” by a young geographer named Jean-François Gravier, helped inspire Charles de Gaulle to reorganize the country — decentralizing resources, redistributing industry, promoting regional cities and creating new towns linked by a nationwide web of publicly funded rail lines. Modern, decentralized France spread a promise of prosperity and mobility. For decades, the promise was kept. Until it wasn’t. As a handful of big cities thrived with

globalization, France’s regional governments, saddled with more financial burdens, became caught in a vicious cycle. Capital disappeared along with factories and jobs. Revenues shrank, debts mounted and infrastructure declined. Among the hardest hit services were the regional railways, run by the French rail company, SNCF, which overwhelmingly invested in high-speed trains that served the big, prospering cities and is now $56 billion in debt. With service atrophying, people need their cars. The gasoline tax “exposed a profound cultural fracture,” said Olivier Galland, a director at the National Center for Scientific Research. On a recent morning, I visited a highway roundabout at Senlis, in the northern region of Oise, where two dozen Yellow Vest protesters huddled around a trash-can fire, sipping cups of tomato soup. Passing drivers honked in sympathy.

It’s no accident that the movement takes its name from the Day-Glo vests that French motorists are required to keep in their vehicles. Like the fuel tax, the vests are a burden imposed on drivers by the state, and, for a population that has felt ignored, they also are an ideal, ready-made tool for getting noticed. “The government makes us pay for these ourselves,” Valérie Lemaire, one of the protesters at the roundabout, said, pointing to her jacket and stamping her feet in the freezing mud. “We pay, pay, pay.” Oise is peripheral France. It includes Senlis, a pretty, prosperous bedroom community. But it is also an area where deindustrialization and inadequate public transit have taken a toll. Just across the road from the Yellow Vest encampment is a new Amazon depot, which offers warehouse jobs. This area used to have better-paying factories. Paris Charles de Gaulle Airport — less than an hour’s drive to the south on the highway, depending on traffic — is the major employer these days. Creil, 15 minutes from Senlis, is a poor city of 35,000 with a largely vacant downtown and blocks of

public housing. It is home to many baggage handlers and airport security guards. There’s no direct train to the airport, and buses are infrequent. So people have to drive if they don’t want to trek into the middle of Paris and then back out again. Avoiding the slower regional roads is also costly, even without factoring in gas, because the French government ceded authority over hefty highway tolls to a private company some years ago. A tollbooth is visible from the roundabout. The Yellow Vest protesters stormed it in November — allowing traffic through without paying. “We paid to build the roads with our taxes,” Christophe Bartel, a 47-year-old protester, told me. “Now we’re supposed to pay private companies a fortune to use our own roads? It is a scandal. We’re fed up.” The protesters also blockaded a nearby mall that has been drawing business from city centers like Creil’s. Claude Letranchant, 59, had scrawled a message on the back of his yellow vest: “Ecology is only an alibi,” referring to the climate argument for the fuel tax.