Within Indian-administered Kashmir, India has banned the Jamaat-e-Islami (JeI) group amid the worst suicide bombing in the region to date. The internal ministry department of India implicated the Pakistani religious political organization for purportedly supporting an armed rebellion within rivaling Pakistan, stating that the group supported the ‘secession of a part of the Indian territory’. (Aljazeera) The attempt by the organization to carve an Islamic state out of the Union was deemed an imminent threat.

India has since carried out what they call ‘non-military pre-emptive action’ on the Pakistani side of the Kashmiri region, arresting over 300 hundred JeI leaders just in the past week. (Aljazeera) The JeI group vehemently claims Jammu and Kashmir as disputed territories, standing by the notion that they are self-endowed to inhabitant the area. Rebel groups in the administered territory want the region to become either independent or under the auspice of Pakistan.

The prospect of Nuclear war between India and Pakistan will remain a concern in the international community for the duration Kashmir looms in ambiguity. Further escalation exacerbating current tensions will irrevocably push the brink of nuclear warfare closer to the edge. The United States, China and the European Union are currently mediating diplomatic peace resolutions, urging steps to quell

the hostile nature of the conflict between the two countries, the most recent being the liberation of an Indian pilot to Pakistan earlier in the month. As tensions seem to have declined, recent spiteful instigations toward Pakistan were incited by Indian Prime Minister Modi in an election rally as he echoed to supporters that they would unite and stand against a common enemy:

India’s belligerent colonial history under British rule, which partitioned the state into modern Pakistan and India, created a deep chasm that has ethnically divided the two states. (Aljazeera 2) As the election draws closer in India, nationalistic tendencies are expected to

rise while Modi’s Hindu-nationalist party is leading in the polls. Based on the results of the election, the pace of relations could take a turn, especially if resentment is explicit and animosity is reciprocated by Muslim majority Pakistan. 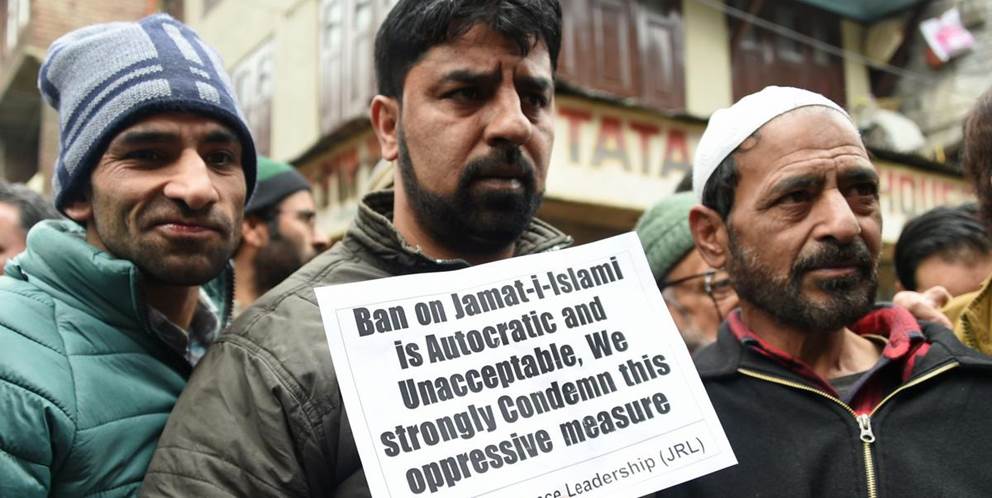 Aims at an enduring appeasement could be futile; deeply engrained sentiments within Pakistan’s morphology are stark and vivid. In the scenario that Kashmir is resolved, new hostilities will emerge from the ether, and another cycle will pollute the landscape. Pakistan’s nationalistic political and military regimes are bent on past defeats and extortion, with

contemporary contentions compounding the existing resentment between the two countries. For any solution to hold its breadth, the two warring states must both be willing to engage and exchange with one another, make unconditional open gestures, and India to take the lead as the generous and selfless agent in the equation. 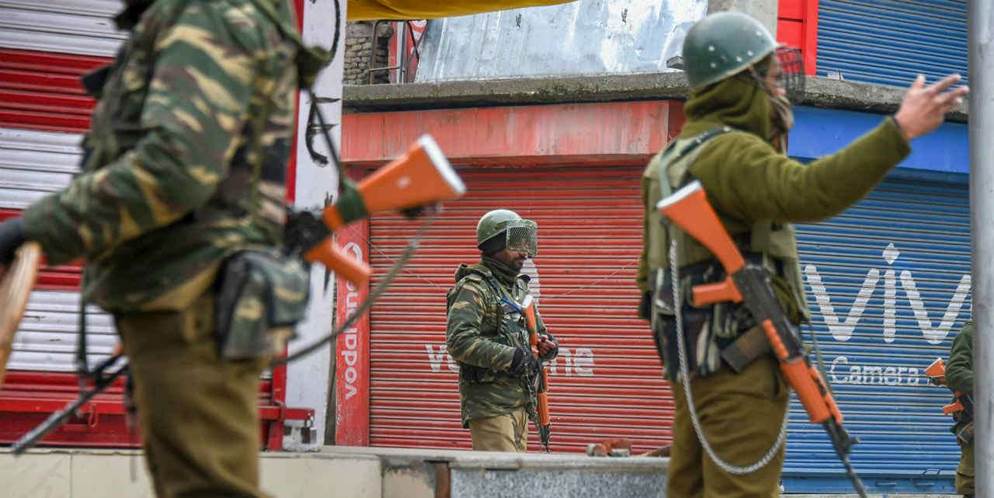 By RIFAT FAREED for AL JAZEERA

The Indian government has banned Jamaat-e-Islami (Jel) in Indian-administered Kashmir for five years, accusing it of supporting an armed rebellion in the disputed region that is at the heart of an escalating conflict with rival Pakistan. The ban on the religious-political organization on Thursday came less than a week after the Indian police arrested more than 300 JeI leaders, including its leader, Abdul Hamid Fayaz. The arrests followed the worst-ever sucide bombing in the disputed region, in which 42 Indian troopers were killed in Pulwama town earlier this month. In a statement on Thursday, India's home ministry said the JeI has been banned for "unlawful association" and for activities "prejudicial to internal security and public order".

The ministry said the group was in touch "with militant outfits and supports extremism and militancy in Jammu and Kashmir and elsewhere" and supported "secession of a part of the Indian territory". If JeI's activities were not curbed, "it is likely to escalate its subversive activities including an attempt to carve out an Islamic state out of the territory of Union of India", the ministry said. It is the third ban to be imposed on the organisation since it was created in 1942, five years before India's independence and the formation of Pakistan. Reacting to the move, a senior JeI leader told Al Jazeera that India's "iron fist policy" would not work. READ MORE >>

"It has been banned earlier also, but I think in the current situation it won't help. The government has used military might and a tough policy for the past five years and they didn't work. The ban won't work either," he said on conditions of anonymity. The JeI leader said the ban was likely to put thousands of students who study in schools run by the group in jeopardy. "These schools are models of progressive and modern outlook. This will jeopardise the future of these students," he said.

In a statement, the JeI said it was being targeted for "reasons unknown" to them. "The use of muscular policy will further destabilise the situation in South Asia. Instead, sincere efforts should be made to solve the long-pending dispute of Kashmir," the statement said. Mehbooba Mufti, the former chief minister of the region, condemned the ban and termed it as "high handedness" of government.

On banning the JeI and arrests made before that, a senior official in Indian-administered Kashmir told Al Jazeera that "there will be continuous action against anti-national forces".  "The leaders have been arrested and they are being categorised now. Police and other agencies are carrying out the process. These leaders are involved in sedition, instigation and inciting violence," said the officer, who did not want to reveal his identity to the media. JeI has a strong cadre base across the restive Kashmir region. It regards itself as separate from Jamaat-e-Islami Hind, its Indian counterpart, and backs Jamaat-e-Islami Pakistan. JeI participated in Indian elections for more than two decades before becoming engaged with separatist politics following the onset of an armed rebellion in Kashmir in 1989. The group maintains that Jammu and

Kashmir is a disputed territory, and seeks its resolution through the right to self-determination of the Kashmiri people. In 1989, when an armed rebellion erupted in Kashmir, the region's largest rebel outfit, Hizbul Mujahideen, declared it was JeI's military wing. As violence spread, the JeI was banned while hundreds of its members were killed by a local counterinsurgency force, known as Ikhwan in the 1990s. Earlier this week, Indian authorities launched a major crackdown on JeI leaders in Kashmir region following the Pulwama suicide attack on February 14, which was claimed by the Pakistan-based Jaish-e-Mohammed group. Since the incident, there has been an escalation of tensions between nuclear-armed India and Pakistan, while the disputed Kashmir region remains on the edge.